To Yokohama and Back again

January 20, 2020
Last weekend I took my first trip of 2020! I had the pleasure of going on a two show mini-tour with my band Youryokutai Club, the first was down in Yokohama and then back to Sapporo for another show the very next day!

We were invited down to play a local event at a small practice studio located just a few train stops from Yokohama Station. The show was hosted by our old friend and killer bassist Yuji, and his band mosimo. We first met Yuji and mosimo about four years ago at our very first show in Tokyo, although at that time Yuji was the bassist in another band. (The music scene down south is very tight…) Long story short, we were getting to play with everybody for the first time in four years, so there was a lot of catching up to do and we were excited to see everyone.

We arrived in Tokyo the night before the show, I met up with some friends downtown and then made my way to a Manga Cafe for some sleep. (They’re surprisingly comfortable, and more importantly cheap!) The next day I met up with my band-mates in the afternoon, but before we headed to the venue we had to get our ‘Omikuji’ (fortunes) from the local shrine!


The studio itself was like a hidden treasure. It’s an old location, someone told me they’ve been open for about 30 years or so, and the building and interior definitely had a retro ‘Showa-Era’ feel. Walking from the closest station, you have to turn away from the busy shopping district onto a street of old houses and apartments, walk a bit down the block and then suddenly on your right you see this:

The building has no elevator, so after walking up four flights of stairs we found ourselves in an old practice studio. One large main lobby and three small practice rooms. It wasn't huge, but it was certainly cozy. 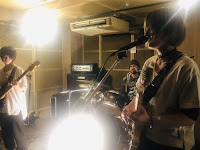 We had a great time playing, the studio sound was perfect for the atmosphere and the audience was welcoming and responsive. It was easy to tell that the local scene is alive and well. The other bands we played with were excellent too. A favorite of mine was the band CHATTER BOX, a post-rock three-piece band with a tight sound and dream-like vocals and guitar. Definitely recommend them if you’re into that, you can check out their music here on soundcloud.
After the show we spent the night killing time around Tokyo station before taking an early-morning bus back to Narita Airport for our 7:30 am flight home to Sapporo.


We arrived early and, after a little nap at home, I headed to the local venue “Sound Lab mole” for our second show! We played at their FSR event, a long-running seasonal show that features a ton of local bands over a two-day period. The venue is actually in an old movie theater building so there’s enough space for four stages, two food booths, a bar, and a merch area. The stage is huge, and the sound and lighting staff are super talented and friendly. We played during the evening, and while we were all a bit tired I think we played pretty well!

And thus ended our mini-tour weekend. Lots of wonderful music and wonderful people to share the time with. Can’t thank Yuji and mosimo enough for having us down for the event, and thanks to mole for always giving us a great spot in FSR!

And thank you for reading! While on the trip last weekend I wrote up my blog entry for January 10th, but I couldn’t figure out how to post it while on the road. So I expect that will be out sometime in the next few days. It’s a look back at the making of my last album, and maybe a bit technical and composition focused, but I tried to make it interesting for everyone!

Also, I wanted to mention that I’ve been working on a personal website over the past few months, so if you have some time please head on over to emiliobuonanni.com and let me know what you think! I’m still in the process of adding content, so if you have suggestions or want to see something on there send me an email or leave me a comment here!

In the next blog: I’ve got an exciting trip planned for this week, so I’ll be telling you about that. AND I’ll be introducing a new music recommendation series that I'll be starting up.

Popular posts from this blog

A Trip to Tokyo

January 30, 2020
Last week I got to head down to Tokyo to see this wonderful woman for the first time in over two years...my mom!!

February 10, 2020
Hello all! Well, February has finally come and with it some pretty hefty snowstorms! On the plus side it finally feels like winter here in Sapporo, and just in time for the Snow Festival too! On the down side it was really hard to walk to work for a few days.


The last two weeks have been really exciting for me, a lot of new releases, a new series, and a ton of composing done. So for today's blog I thought I'd fill you in on everything that's come out, and give a little extra info about it all!

Before I get into all that though, I just wanted to take a moment and share this incredible Meiji chocolate wrapper art. I found these in my local supermarket and I think they're absolutely adorable. There are a bunch of different designs, but they all have this simple eye-catching art style.

I listen to a lot of music, and a large amount of it is either local or from artists only popular here in Japan. I would love to be a…
Post a Comment
Read more